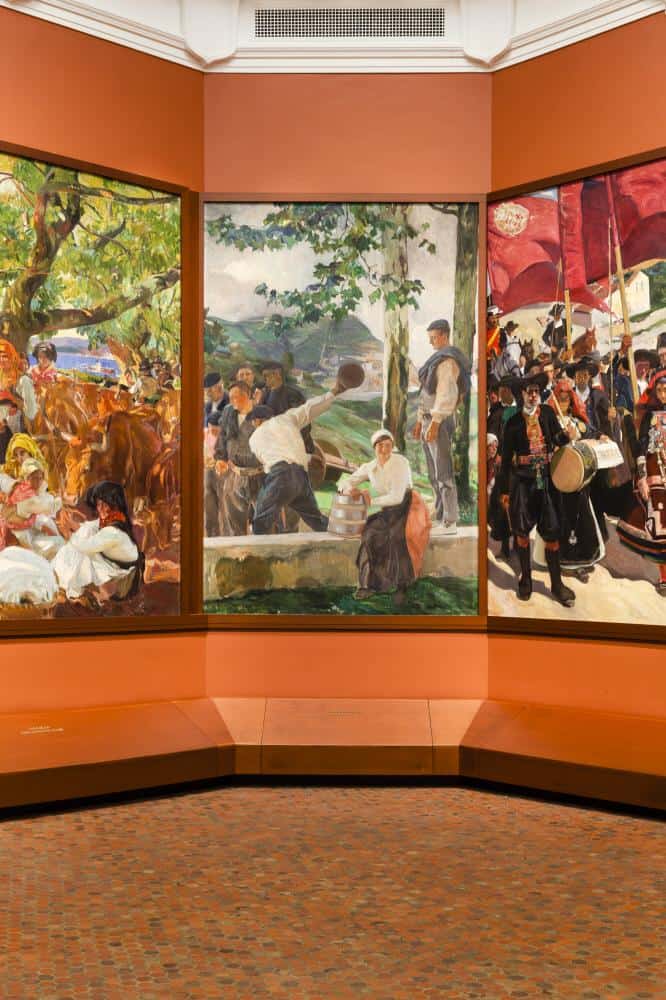 Seeing a Sorolla Is Believing

If you think you’ve seen these paintings by viewing them on the internet, or reproductions in books, I can assure you, you have not. I urge you to seek out these pictures, or any other works by Sorolla, to see them for yourself, in person.

On a warm July Tuesday in 2016, I caught a mid-morning train to Manhattan. Crossing over to the west side via subway, I transferred to the Broadway local train venturing further north on the island than I had been in many years. My destination, The Hispanic Society of America, is located between 155th and 156th Streets just west of Broadway.

When I finally walked into the museum’s courtyard a few blocks south of the subway stop, I felt like I’d left the chaos of the city completely behind. There was an eerie tranquillity in the football-field-sized deserted brick plaza populated only by bronzes of Spanish luminaries, explorers, and war heroes. I made my way up steep steps to the granite building’s bronze doors. Dedicated in 1903, the imposing structure looks more like a huge mausoleum or a Wall Street bank than a museum.

My arrival aroused the front door security guard from his mid-morning nap. As he straightened his tie and welcomed me in Spanglish, I suspected I was one of the first visitors of the day, and perhaps, one of the few for the entire week.

The cathedral-like interior was painted a deep brick red. It seemed to absorb all light. My eyes struggled to adjust. Instinctively, I reached for my wallet, ready to pay an admission fee, when the guard informed me the museum is free to enter but donations were accepted. I dropped a $10 bill into the box and ventured toward the central interior courtyard awash in feeble gray daylight filtering through a translucent glass roof.

Once in the center of a great medieval hall, from the corner of my eye, a splash of exuberant color caught my attention. Sorolla colors beckoned from the furthest reaches of the dark balcony gallery above. I turned and mounted the narrow stairs. On the balcony, I glided past the several umber-colored works, including a few El Grecos, of 16th-century Spanish saints and demons.

The first of the four Sorolla canvases on the balcony is the breezy portrait of Tiffany seated in his flower-filled garden (Louis Comfort Tiffany,1911). Then, next to it, the massive scene of Valencian fisherman and their powerful oxen beaching a heavy wooden-hulled sailboat caught in an offshore wind (Afternoon Sun. Beaching the Boat, 1903).

That canvas was flanked by a smaller (although, still nearly life-sized) intimate portrait of a young boy and girl, glistening in the shallow surf (Sea Idyll, 1908). And, finally, a portrait of a beautiful dark-haired woman on the beach, donning her crisp, white robe after a swim.

These pictures are riveting. Whether, or not, pictorial realism is your thing, these four pictures are difficult to pry your eyes away from. They demand the eye rove over their thickly painted surfaces, in spite of the poor lighting, the distracting frames, and the narrow space available to stand back and take them in completely.

If you think you’ve seen these paintings by viewing them on the internet, or reproductions in books, I can assure you, you have not. I urge you to seek out these pictures, or any other works by Sorolla, to see them for yourself, in person. You will be astonished by their color, scale, and liveliness. You will be transformed by the power of this deft artist to extract a strong emotional response from a viewer a hundred years later. How many painters can claim that?

The illusion of depth, so skillfully managed and completely entrancing, pulls the viewer’s attention through each scene using the simple dichotomy of secondary complementary colors, red-orange/blue-green, orange-yellow/blue-violet, and red-violet/yellow-green locked in whorls of vigorous, form-hugging brushstrokes. What seems to be a crisp edge of a solid form at ten feet way dissolves into a tumult of soft interweaving layered colors when viewed up close. His highlights and shadows are placed infallibly at right angles to the source of light. The reflected light of a garment glows on the face of a child.

One gets the immediate sense of being playfully manipulated to believe in this painter’s virtual reality by his subtle illusions, disappearing edges and subliminal tricks designed to deceive and reveal what one thinks to be a crisp detail to the unsuspecting eye and brain.

The rugged fisherman in the foreground casts a cool bluish late afternoon shadow across the hindquarter of the struggling ox half a body’s length away. The bluish shadow adheres to that ox’s orange flank so convincingly the observer could not be blamed for thinking momentarily of inserting one’s hand in the illusory space between animal and man.

I'm a fine art painter and photographer who is always seeking to turn the ordinary into something extraordinary.